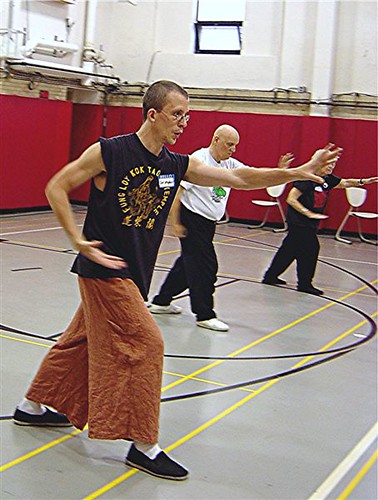 This ebook, Tai Chi and the Alexander Technique Principles of Good Body Use, is published on this website in a PDF format. It is very detailed and practical, and it will give you the physical tools you need to take the limits off of your ability to do tai chi with ease, elegance, poise, and released joints.
This ebook is also for sale on all AMAZON websites in a KINDLE format.
Located in Albuquerque, New Mexico, U.S.A. (MOVEMENT THERAPY)

When you first learned tai chi, you may have used tension to make sure you remembered the order of the movements and to make sure you do them well. Now, if you released that tension as you got comfortable with the forms, then this is a good thing. But what if after you’ve mastered the form, you’re still doing too much work, which is doing the forms with down, no matter how up they look to others? (An Alexander Technique teacher can see the equivalent of a literally “held up down” in any activity.)

Let’s look at the possibility of learning to do tai chi without any effort from the very beginning. I believe the way to do this is by learning a form a section at a time, and then after you’ve mastered the sections, stringing them all together. I’d also like to suggest that you take the last few movements of a form and learn it first. Then take the movements before the last section and learn it overlapping into the first part of the last section of the form. This is learning the form out of order but setting up the connecting movements between the sections you’ve divided the form into.

Unlike the martial arts, tai chi is understood to be truly about the means – how you do the form as you’re doing it. There really is no ends to a tai chi form. What I mean by this is that learning a tai chi form serves no purpose except to bring you physical balance and inner peace as you do it, and of course have this peace and balance last throughout the day.

If you’re practicing a musical instrument, it is so easy to get caught up in the ends, which would be getting the peace perfect enough for a performance. Or if you’re learning the forms in the martial arts, then if you’re doing the forms at a fighting tempo, then the ends may be having you sacrifice the form of the form in preparation for a match.

I think it would be an amazing exercise for a person who has mastered a form to move through it incredibly slowly. It would really reveal to the practitioner where you are doing too much work to hold up an arm or move a leg. It would also reveal to you which part of the form is setting the tempo. In other words it would show you which parts of the form you are unsure of in terms of memory, balance, and directing. As you move incredibly slowly through the form, you’ll begin to notice where you feel you are straining to stay on balance.