This ebook, An Alexander Technique Approach to the Martial Arts, is published in a PDF format. It is very detailed and practical, and it will give you the physical tools you need to take the limits off of your ability to do a martial arts form with ease, power, poise, and released joints.
This ebook is also for sale on all AMAZON websites in a KINDLE format.
Located in Albuquerque, New Mexico, U.S.A. (MOVEMENT THERAPY) 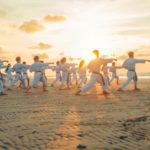