May 12, 2022 / Ethan Kind / Comments Off on Harp – Technique Not Immutable (Musicians)(Psychology)(Pain)(Strain)(Injuries)(Posture)(Alexander Technique) 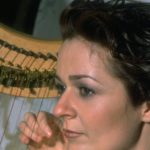