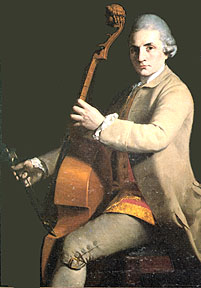 This ebook is published on this website in a PDF format.
This ebook is also for sale on all AMAZON websites in a KINDLE format.
Located in Albuquerque, New Mexico, U.S.A. (MOVEMENT THERAPY)

The central principle in the Alexander Technique is if you allow the neck to release and the head to LEAD a lengthening spine in any activity, then the freed-up decompressed central nervous system will allow you to move with elegance, ease, and coordination, and this is called directing. This is an extremely important concept and action that needs to be especially clarified for viol players, because there are four major things that viol players do in their technique that usually compromises this inherent way of organizing the body.

They are: viol players use too much muscle to hold onto the instrument with the their legs, viol players collapsing their necks to see the neck of the viol and the bow, playing in the higher registers usually collapses the whole head, neck, and torso, and playing on the first string usually collapses the right side of the torso, resulting in the head and neck leaning and going down as the shoulder is pulled around to reach the first string (and the reverse on the lowest strings, pulling the shoulder backwards off of the torso).

Before I talk about these four things that viol players do to compromise their technique, I’d like to talk about what almost all musicians do to compromise their technique. It is the opposite of the opening sentence of this section. Almost all musicians shorten their neck and spine when they play. Psychologically speaking, this happens because the intention to play well usually makes most performers afraid of making mistakes.

I don’t want to go into analyzing that here, but what I do want to do is what the purist Alexander Technique teacher would do. You teach the student to order their body to stop doing what isn’t working and/or order the body to do what does work.

Orders is the word that F. M. Alexander called the thoughts you direct toward your body, where you ask it what you want it to do or not to do. One of the most basic orders is, “My neck is free, and my head is leading a lengthening spine and a widening back”. This order is a combination of telling the neck to release and then telling the spine to lengthen. Even though the word order typically now has a negative connotation, in this Alexandrian sense, these orders of allowance are a kind conscious control of your body.

Ideally you want to reestablish this inherent body organization that most three and four-year-olds have, and that is children play and run with a free neck and lengthening spine. So, even if you’re performing a concert and you’re afraid, you can choose to order/allow your neck to be free and your spine to lengthen, so that you don’t hunker down compromising the performance and escalating your fear. In other words, if your body is in beautiful balanced postural alignment in a performance, it won’t compromise the performance from the get go.

When the viol player supports the instrument between her legs with the minimum pressure necessary and has the viol be absolutely vertical, then the instrument is in its most mechanically advantageous relationship to the body.